It is an established practice of Magyar Posta to periodically present the breeds and species of animal indigenous to Hungary on stamps. On this occasion the protected predatory and insectivorous mammals the stoat, pygmy shrew, European lynx and greater mouse-eared bat feature on the stamps in the series, and the northern white-breasted hedgehog is shown on a numbered stamp block. The miniature artworks were designed by István Weisenburger using the works of the prize-winning graphic artist and painter Erzsébet Valaczkai, and were printed by the banknote printing company Pénzjegynyomda. The new stamps are to be released on 9 April at Filaposta and large post offices in Hungary, but will also be available for purchase on Magyar Posta’s web site. 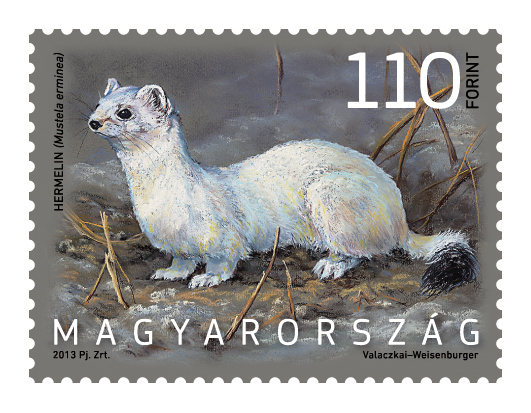 This long, slim animal favours damp habitats and avoids closed forests. It mainly eats small rodents and birds. It is an opportunistic, skilful predator. Its winter coat is entirely white except for the black tail, and in the summer its coat is sandy brown on the back, white on its belly and chest, and black at the tip of its tail. 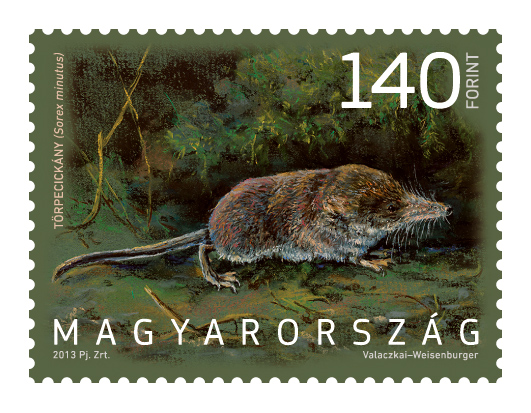 It inhabits dry shrubby areas with abundant vegetation, avoiding closed forests. It preys on small insects and invertebrates. In winter it spends about 50 per cent of its active time above ground, which means it can easily fall victim to owls. It reproduces several times a year, giving birth to 4 to 7 cubs on each occasion.
European lynx (Lynx lynx) • 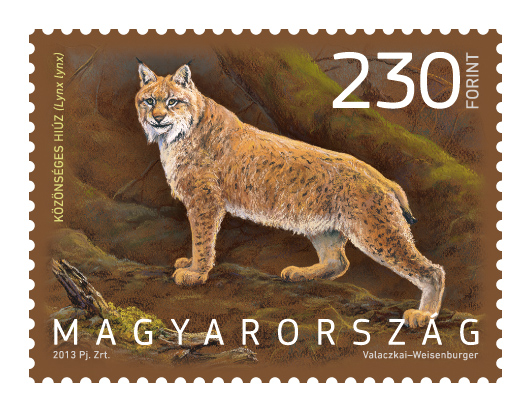 The lynx prefers extensive dense forests. Besides its spotted coat and distinctive beard, a distinguishing feature is the tuft of fur at the tip of its ears. It has excellent hearing and touch. Its long limbs and muscular body enable the animal to leap 3 to 4 metres to pounce on its prey even in deep snow.
Greater mouse-eared bat (Myotis myotis) • 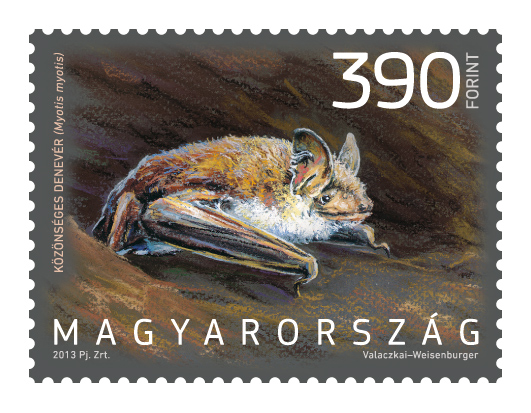 Hungary’s most common bat is active at night and is gregarious. It favours open, sparsely wooded areas but also lives in residential areas. It spends the winter in caves. This insectivorous mammal catches its prey using high frequency sounds and echolocation. Its lifespan is over 20 years.
Northern white-breasted hedgehog (Erinaceus roumanicus) • 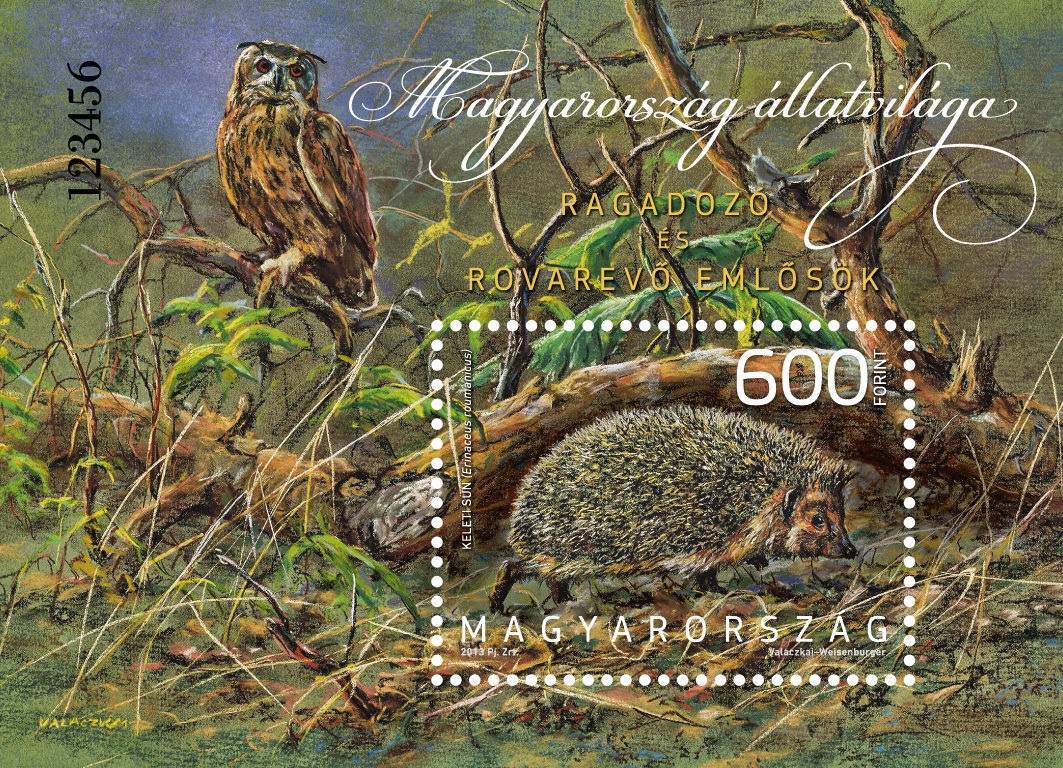 This nocturnal animal lives among dense undergrowth in sparse woodland, among bushes and in gardens and parkland. Its sharp teeth are effective not only for capturing earthworms but they can also easily bit a snake in two. It has a thick coat of spines and an undercoat of fur. The black and white banded spines harden shortly after birth. Its breast is covered in white fur. It has well-developed skin muscles, allowing it to curl up in a defensive ball. It hibernates and females have two litters a year. It can live up to ten years. Source: hu.wikipedia.org
FAUNA OF HUNGARY 2013
Order code: 2013080030011 (block); 2013070050411 (set); 2013080060012 (block FDC); 2013070060012 (set FDC)
Date of issue: 9 April 2013 
Total face value: HUF 1,470 
Number of copies issued: 80,000 blocks and 200.000 sets 
The block’s imperforated size is 90 x 65 mm and the stamps’ perforated size is: 40 x 30 mm
Printed by Pénzjegynyomda Zrt.  Designed by István Weisenburger 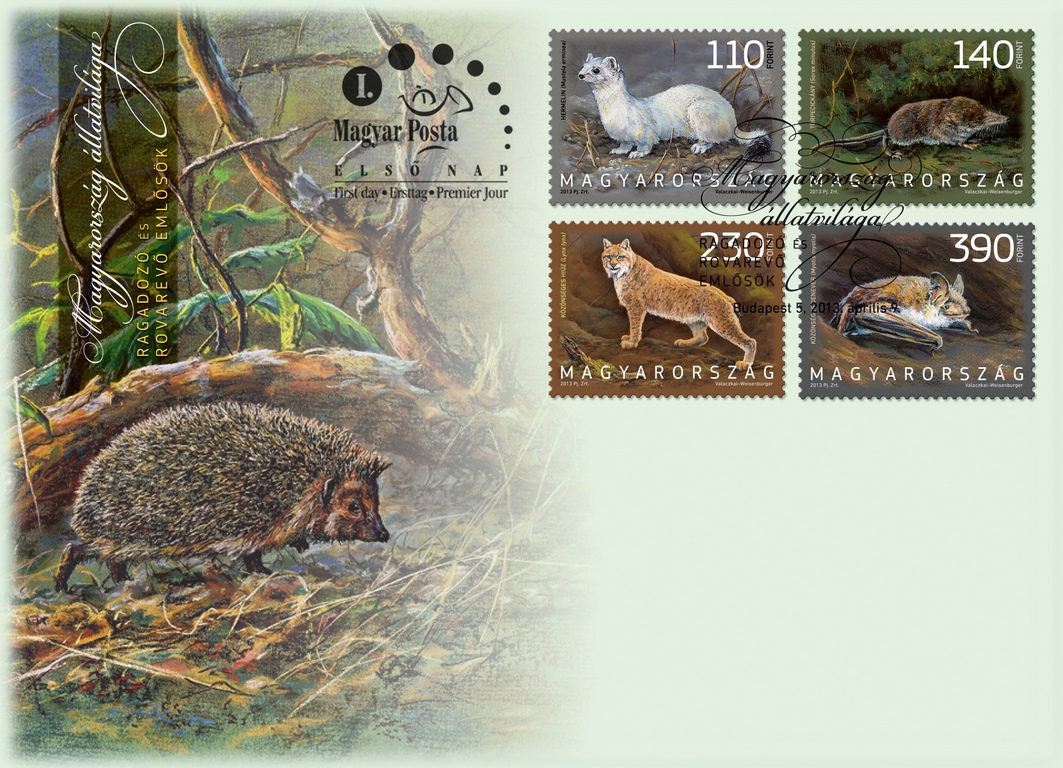 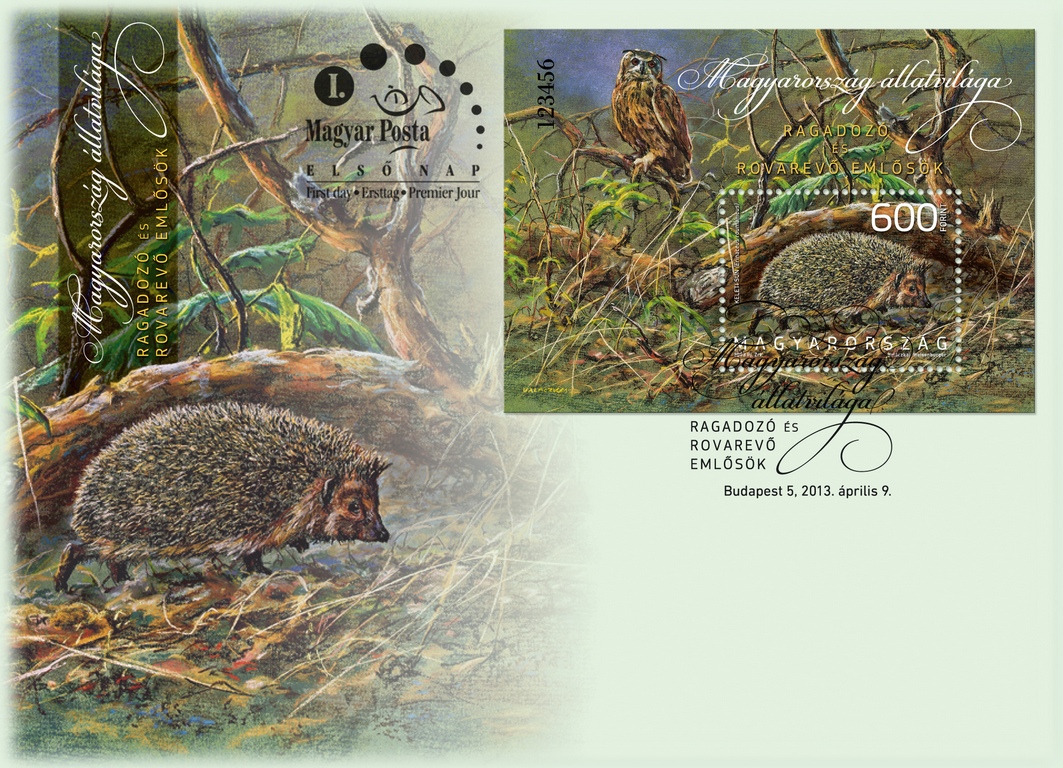