Repatriation of the Sevso treasure

Repatriation of the Sevso treasure

Magyar Posta is issuing a commemorative stamp block to mark the repatriation of the Sevso treasure. The design of the block and its stamps shows the seven pieces of the Sevso treasure returned to Hungary. These are the Hunting Plate, the Geometric Plate, the Dionysiac Ewer, the Basin, two Geometric Ewers and the Casket. In addition to the standard version of the block numbered in black, an imperforate edition with red numbering is also being released. The new issue was designed by the graphic artist Imre Benedek and produced by the banknote printing company Pénzjegynyomda using embossed and diffraction film printing, and UV ink. The new issue will be available at large post offices and Filaposta in Hungary from 25 August, but may also be purchased from Magyar Posta’s online store. 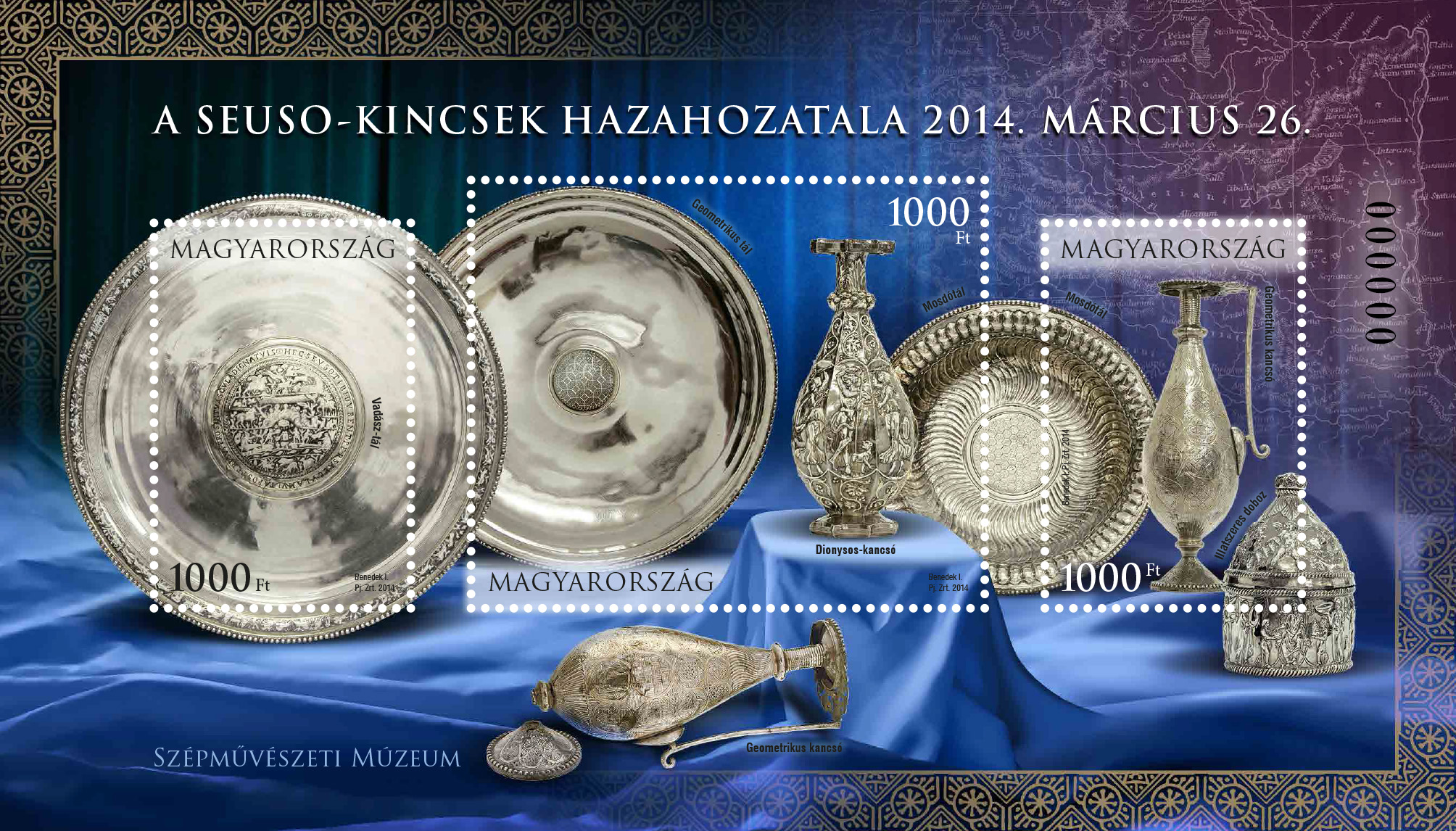 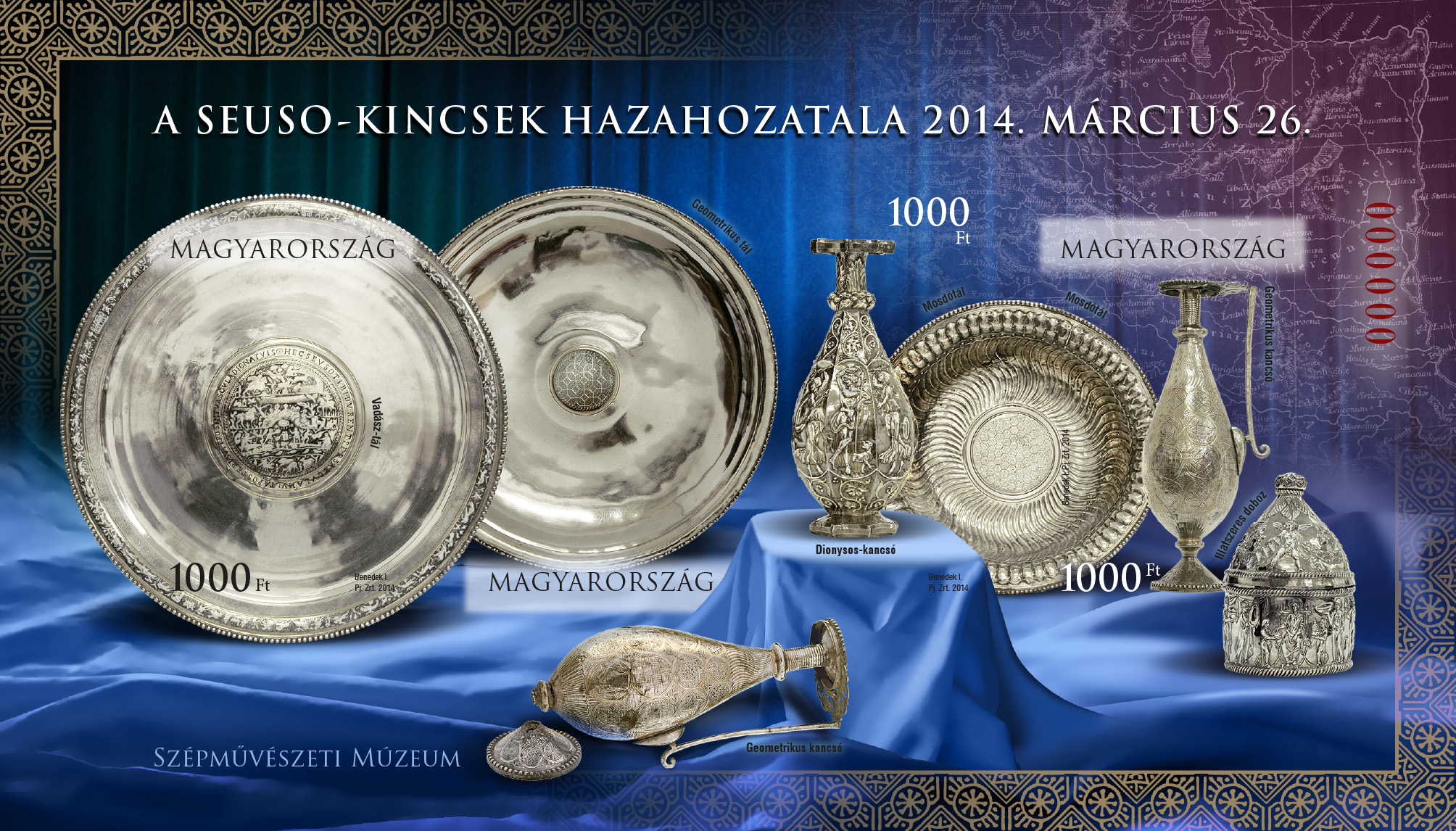 The best-known piece, which lends its name to the treasure, is a huge silver gilt salver, the Hunting Plate, decorated in the centre with figures dining outdoors surrounded by hunting scenes. Another of the returned pieces is the slightly smaller salver for serving food known as the Geometric Plate because of the rosette and palmette decoration composed of intersecting octagons and squares adorning the central roundel. The smallest of the ewers of the Sevso Treasure, the Dionysiac Ewer, which was probably used for serving wine, is the most impressive in its ornamentation. The two other vessels are covered in floral and geometric motifs, hence their name the Geometric Ewers. The upper sections of the body of these ewers have undulating lines of a similar pattern to that of the Basin. The bases of these two ewers fit into the centre of the basin precisely, so the three vessels appear to form a set for washing hands. The cylindrical Casket has a lid and is adorned with repoussé scenes of women bathing and at their toilette. The perforated silver plate fixed inside suggests it was used to store perfume flasks. The SEVSO STAMP SET, issued to mark the repatriation of the Sevso Treasure, includes a red-numbered, imperforate edition alongside the standard black-numbered block. The silver artefacts on the stamp block are enhanced by the use of diffraction film and embossed printing. Under ultraviolet light the Latin inscription in verse surrounding the scenes in the central roundel of the silver gilt Hunting Plate, “HEC SEVSO TIBI DVRENT PER SAECVLA MVLTA POSTERIS VT PROSINT VASCVLA DIGNA TVIS” and its Hungarian translation meaning “May these, O Sevso, yours for many ages be, small vessels fit to serve your offspring worthily” are visible. 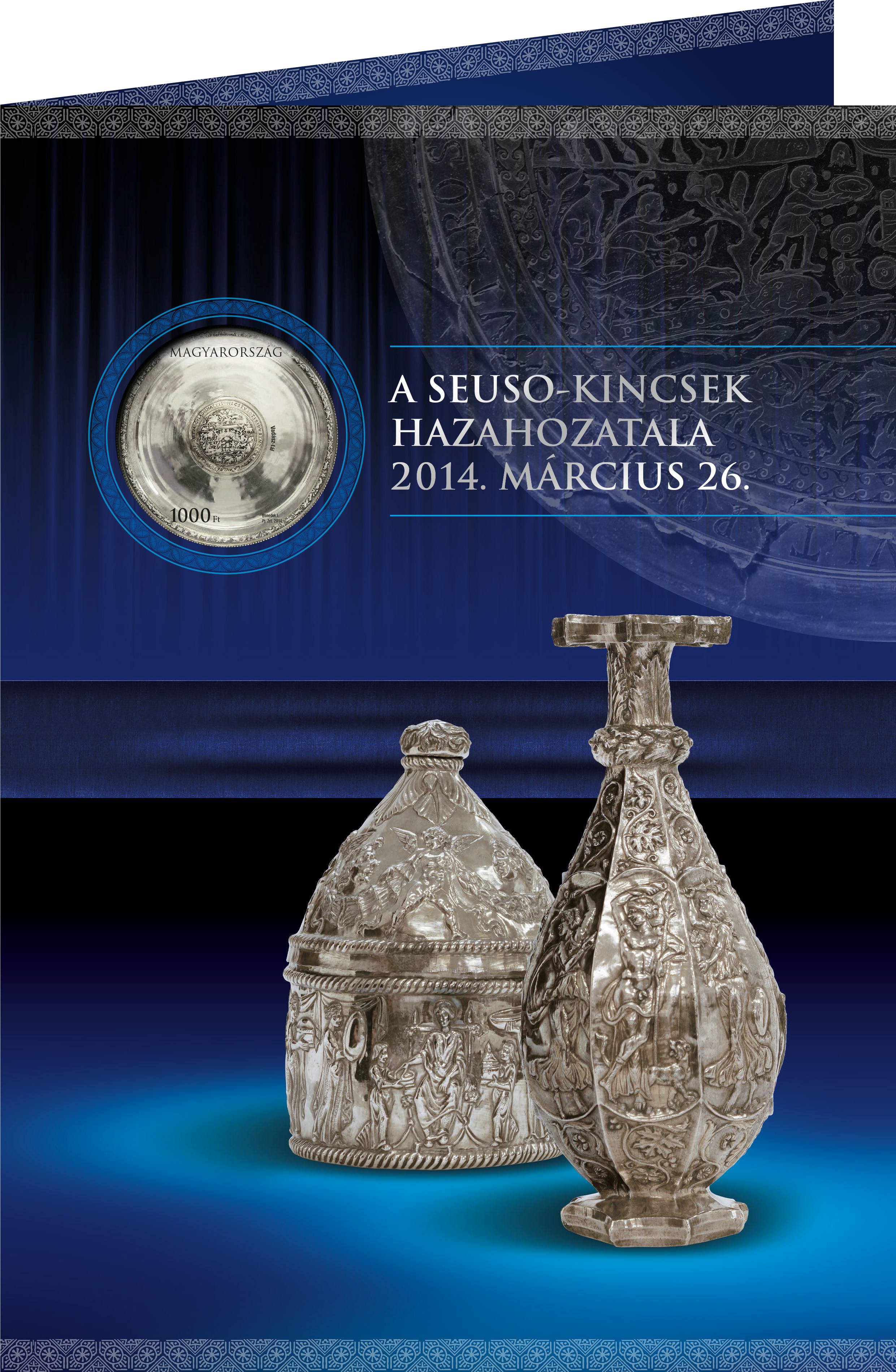 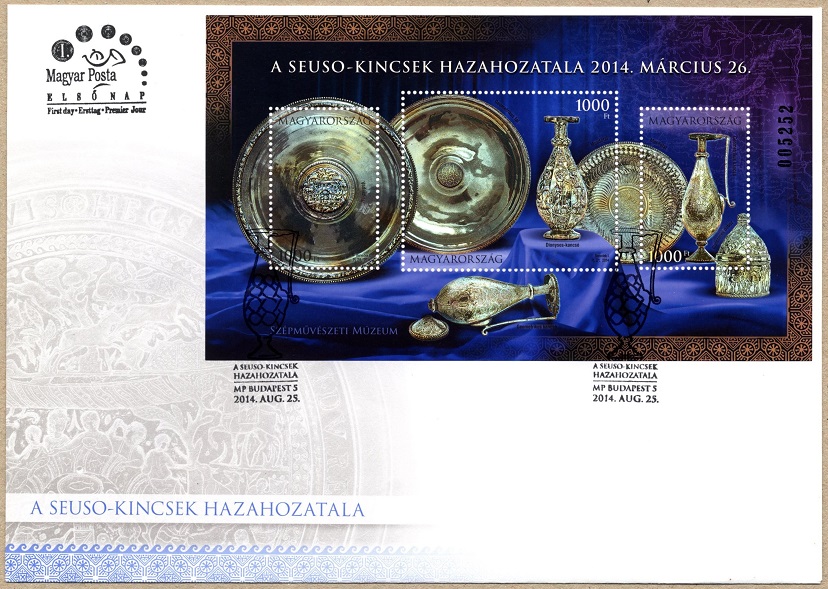