Each year PostEurop, the Association of European Postal Operators, offers its members the opportunity of issuing EUROPA stamps on a common topic. The designs entered in this stamp beauty contest are judged by the public and a jury of philatelic experts. The theme for this year is “national music instruments”. Three exceptional instruments from the Leskowszky Instrument Collection – a Jew’s harp, a hit-gardon and a hurdy-gurdy – are illustrated on Magyar Posta’s miniature sheet. The stamp featuring the Jew’s harp has been entered in the Europa stamp competition. Seventy thousand copies of the miniature sheet designed by the graphic artist Barnabás Baticz were produced by the ANY Security Printing Company. 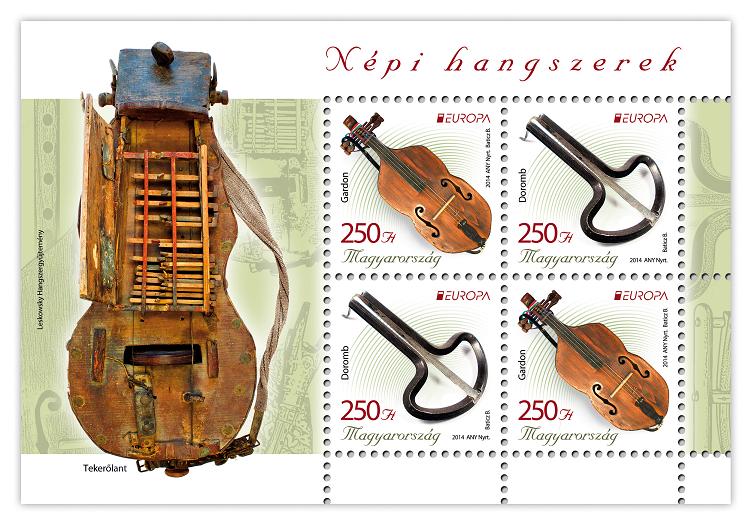 The Jew’s harp is one of the oldest music instruments in the world. The instrument was used for spiritual purposes in magic and healing in the past, and today can be heard in almost all styles of music. The frame is held by the player’s lips or teeth, and the instrument’s tongue is plucked. Melodies are created by moving the mouth, which acts as a resonator. In Hungarian folk music the use of the Jew’s harp by the Csango people in the Romanian region of Moldavia, where it is played both as a melodic and rhythmic instrument, is considered authentic. The hit-gardon, a percussive cello, is probably the only string instrument in the world played to provide rhythm rather than melody.
Three of the hit-gardon’s four strings are made of sheep’s gut and these are beaten with a stick. The fourth string is thinner and is plucked. It appeared in Transylvania in the 17th century and became a principal instrument in the music of the Csango people of Gyimes. The hurdy-gurdy (wheel fiddle) constantly vibrates both the melody string(s) and the accompanying drone strings by turning a rosined wheel. The performer plays the melody on a keyboard that alters the pitch by pressing against a string. It appeared in Europe in the 10th century and became widespread in many places. The hurdy-gurdy has been present in Hungarian folk music since the 16th century. It is most common in the central and southern parts of the Hungarian Great Plain. (Source: Áron Szilágyi, Leskowszky Instrument Collection)