Each year the members of the Association of European Postal Operators (PostEurop) issue stamps on a common theme to emphasise both the importance of philately and the cooperation of the postal operators. By releasing the stamps, the member countries draw attention to their common roots of European history and culture, and to common future goals. The “EUROPA stamp” is one of the most popular themes for collectors and issues bearing the official logo are among the most sought-after new stamps. The theme for 2017 is castles. Seventy thousand copies of the Hungarian miniature sheet consisting of two pairs of stamps designed by the graphic artist Eszter Domé were produced by the banknote printing company Pénzjegynyomda Zrt. The new issue will be available at first day post offices and Filaposta in Hungary from 5 May 2017, but may also be ordered from Magyar Posta’s online store. 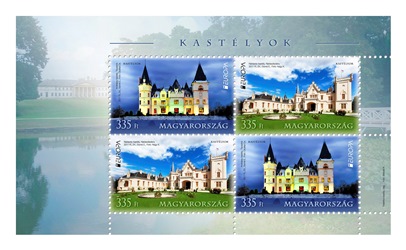 The Andrássy Castle in Tiszadob appears on the first stamp. The village surrounded by backwaters, floodplain forests and grassland is situated on the border of three counties in north-eastern Hungary, Borsod-Abaúj-Zemplén, Hajdú-Bihar and Szabolcs-Szatmár-Bereg. The castle was built between 1886 and 1890 in an area of extraordinary natural beauty, which is still breathtaking today. It was designed by Arthur Meinig, who was inspired by the owner of the estate Count Andrássy to erect a building combining the noblest features of historical Romantic Hungarian architecture drawing mainly on the style of Vajdahunyad Castle. This aim was successfully achieved as the castle’s exterior blends the characteristics of several Transylvanian castles that served as models. The well-tended English park and French gardens with rose bowers renowned for their beauty were designed with artistic flair and reputedly enchanted Hungary’s popular Queen Elizabeth in their golden age. According to legend, the building reflects the year by having 4 entrances for the 4 seasons, 12 towers for the 12 months, 52 rooms for the 52 weeks, and 365 panes of glass for the 365 days. The historic building has been fully renovated and operates as a visitor centre, providing access to the castle with rooms with period furnishings as well as the grounds, and serving as the location for permanent and temporary exhibitions and cultural events.
The second stamp features the Nádasdy Castle in Nádasdladány, a village in Fejér county in central Hungary. The castle, built in the spirit of 16th-century English and Scottish architectural traditions, together with the surrounding park, is the symbol of the past, strength and power of the Nádasdy family over several centuries, and is a unique building in Hungarian castle architecture. A masterpiece of the age of revivalism, the castle was built for Count Ferenc Nádasdy between 1873 and 1880. It was designed by István Linzbauer, and Alajos Hauszmann was responsible for the interior from 1880 onwards. The rooms were adorned with paintings and works by the greatest masters of the period. The Hall of Ancestors, a family portrait gallery with full-length portraits of past generations, is perhaps the most impressive room in the castle. After the Second World War, the building was neglected and the treasures it housed were dispersed. In 1993 it was listed as a major historic monument and came under the ownership of the state. Today part of the ground floor has been renovated and furnished, welcoming visitors as a museum with permanent and temporary exhibitions and cultural events. The family portraits are gradually being returned to the Hall of Ancestors and the recompilation of the once renowned library has begun.

The Festetics Castle in Dég can be seen in the border of the miniature sheet and a part of the L’Huillier-Coburg Castle in Edelény appears on the first day cover.