Centenary of the birth of Sir Edmund Percival Hillary

Magyar Posta is issuing a commemorative stamp in honour of the centenary of the birth of Sir Edmund Percival Hillary. One hundred and fifty thousand copies of the stamp designed by the graphic artist András Szunyoghy Jr were produced by ANY Security Printing Company. The new issue is available from Filaposta, philately specialist services, certain post offices and www.posta.hu. 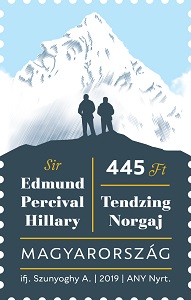 Sir Edmund Percival Hillary, the legendary mountain climber, explorer and diplomat, and the Nepalese Sherpa Tenzing Norgay became the first people to reach the top of the highest mountain in the world. Apart from Mount Everest, Hillary was also the first person to conquer the North and South Poles.During his life he established several schools, hospitals, airports and bridges, and contributed to building a number of monasteries. He raised and devoted large sums of money to helping the Nepalese people. His many honours include the Order of New Zealand, which he was the first to receive, and being knighted by Queen Elizabeth II. The stamp depicts him and Sherpa Tenzing during the climb. On the first day cover, in addition to Hillary’s portrait, there is a stylised map of the globe with the New Zealand mountaineer’s signature pointing to the most important geographical locations of his life. The special postmark shows the summit of a mountain.