The Diet of Torda was held 450 years ago

Magyar Posta is issuing a commemorative stamp in honour of the 450th anniversary of the proclamation of the Act on Religious Freedom adopted by the Diet of Torda in 1568. Two hundred thousand copies of the commemorative stamp designed by the graphic artist Attila André Elekes were produced by the banknote printing company Pénzjegynyomda. The new issue will go on sale from 2 May 2018 and from that date will be available at first day post offices and Filaposta in Hungary but may also be ordered from Magyar Posta's online store. 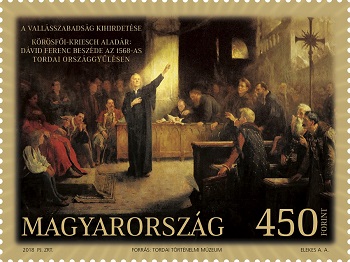 The Hungarian Unitarian Church dates its establishment as an institution from the proclamation of the Act on Religious Freedom adopted by the Diet of Torda in 1568. The Transylvanian Diet held in Torda (today Turda, Romania) between 6 and 13 January was the first to commit itself to religious diversity, due to which the different branches of Reformation could evolve freely and peaceably into independent churches, making it possible for the four established denominations (Catholic, Reformed, Evangelical-Lutheran and Unitarian) to develop their sectarian system. The Hungarian Unitarian Church declared 2018 as the year of religious freedom and on its initiative the Hungarian Parliament passed Act I of 2018 on the importance of the 1568 Act on Religious Freedom of Torda and the Day of Religious Freedom and made 13 January, the day on which the 1568 religious law was proclaimed, the Day of Religious Freedom.

The celebratory 2018 law is a worthy tribute to the religious law adopted at Torda, which was the first in the world to proclaim one of the fundamental merits of modern democracy, the right to exercise religious freedom. According to the celebratory law’s justification “… The notion of the Torda Act, the religious self-determination of the community, can also be considered as paving the way for modern democracy, which gained universal acknowledgement in western civilisation over the course of history and can deservedly be regarded as one of the basic values of Christian Europe.”

The stamp features a reproduction of an oil painting by Aladár Körösfői-Kriesch, Ferenc Dávid’s Address to the 1568 Diet of Torda. On the occasion of the millennium of the foundation of the Hungarian state, several counties, towns and communities were preparing to erect a memorial of artistic value of local historic figures or outstanding events for posterity. The town of Torda made a community decision to commission a painting that recorded the historic moment of the 1568 Diet, the proclamation of religious tolerance and freedom. The commission to make the artwork was awarded to the painter Aladár Körösfői-Kriesch.

The Hungarian Unitarian Church honours Ferenc Dávid, who was born around 1520 in Kolozsvár (today Cluj-Napoca, Romania), as a prophet of freedom of conscience and religious tolerance, and a martyr of Unitarian Reformation and founder of the Unitarian Church.

The composition shows the figure of Ferenc Dávid illuminated by light coming through the church window. The bishop and preacher proclaims the noble concept of the freedom of faith by placing his right hand on his heart and holding his left hand towards the light. The first day cover is illustrated by the pulpit of the Nagy Ignác Street church of the Unitarian Religious Community in Budapest with an extract of the resolution of the 1568 Diet of Torda on religion in the background. The coat of arms of the Hungarian Unitarian Church is used for the commemorative postmark.