Magyar Posta is marking the staging in Hungary in 2019 of the Modern Pentathlon World Championships by issuing a special stamp. One hundred and twenty thousand copies of the stamp designed by the graphic artist András Széki were produced by ANY Security Printing Company. The new issue will go on sale from 8 July 2019 and from that date will be available at first day post offices, Filaposta, philately specialist services, certain post offices and www.posta.hu. 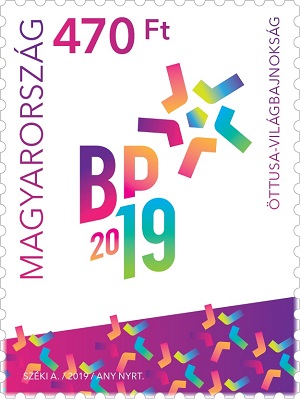 The first modern pentathlon association was formed in 1911, the year in which the congress of the International Olympic Committee held in Budapest decided to introduce the modern pentathlon into the sports programme of the Olympic Games, thus the discipline has been present at the Olympics continuously since the 1912 Stockholm Olympiad.

Budapest will host the adult world championships for the eighth time and the Laser Run World Championships will also be staged in the Hungarian capital for the first time. The two simultaneous competitions are expected to attract many athletes and large crowds to the city.

The Modern Pentathlon World Championships will be held in Kincsem Park, Budapest, between 2 and 8 September, where spectators can watch all the events of the competition from the same seat. The stamp, first day cover and special postmark all feature the championships’ logo or parts of it.