MAN LANDED ON THE MOON 50 YEARS AGO

Magyar Posta is issuing a numbered special souvenir sheet to mark the first manned Moon landing on 21 July 1969. The souvenir sheet was designed by the graphic artist György Kara and 60,000 perforated and 4,000 imperforated copies were produced of it by ANY Security Printing Company. The new issue is available from Filaposta, philately specialist services, certain post offices and www.posta.hu. 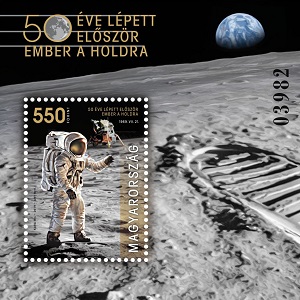 On 21 July 1969 everyone who could watched television holding their breath to witness Neil Armstrong become the first man to set foot on the Moon as part of the Apollo programme promoted by the American President John Fitzgerald Kennedy. The other members of the crew were Edwin “Buzz” Aldrin and Michael Collins. This was the Apollo 11 mission, which was followed by five successful and one abortive expedition. The astronauts descended from the Lunar Orbiter in the Lunar Module, and then climbed down a ladder to reach the surface. There they made measurements with different instruments and collected samples of lunar rocks.

The stamp of the souvenir sheet designed using computer graphics depicts an astronaut walking on the Moon with the Lunar Module in the background. The legendary first footprint left on the Moon, which due to the lack of erosion by the wind has remained in effect the same ever since, features in the frame. The planet Earth can be seen in the distance in the graphic composition. A diagrammatic drawing of the Lunar Module appears on the first day cover.