Each year the members of the Association of European Postal Operators (PostEurop) issue stamps on a common theme to present the identical values of their countries. The “EUROPA stamp” is still one of the most popular themes for collectors, and issues bearing the official logo are among the most sought-after new stamps. In 2019 the member countries are presenting the theme of national birds on their stamps. The Hungarian miniature sheet consisting of two pairs of stamps was designed by the graphic artist Ágnes Berta of which 40,000 copies were produced by the banknote printing company Pénzjegynyomda Zrt. The miniature sheet is available from Filaposta, philately specialist services, certain post offices and www.posta.hu. 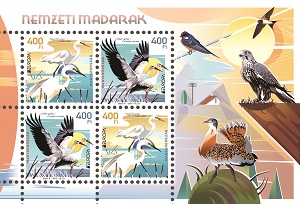 The white stork is a well-known bird that can be observed in or around almost all settlements. It flies to Africa in winter, covering several thousand kilometres, and reappears in the Carpathian Basin at the end of March.

The great egret primarily nests in reed beds and floodplain forests. It is a large, gregarious wader.On the frame of the miniature sheet there are a few other bird species characteristic of Hungary: the saker falcon, swallow and great bustard. The first day cover again shows the white stork and the great egret, while the swallow reappears in the special postmark.