On the occasion of the 70th anniversary of establishing Hungarian-Chinese diplomatic relations, Magyar Posta is releasing two types of personalised stamp sheets, one being designed by the Hungarian graphic artist Alexandra Máté and the other by the Chinese graphic designer Zhao Wenjie. Five thousand pieces of each of the two sheets are available from Filaposta, philately specialist services, certain post offices and www.posta.hu. 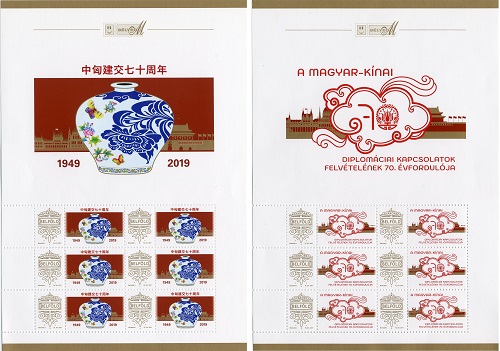 On 6 October 1949 China and Hungary established diplomatic relations. Political and economic cooperation started between the two countries resulting in scientific, cultural, educational and tourism agreements and exchange relations. Over recent years, the development of Chinese relations has been given high priority and today China is one of Hungary’s most important export-import partners from outside Europe.The graphics of the Hungarian-designed stamp show the number in reference to the anniversary combined with an embroidery pattern in a “happy” cloud, while the Chinese-designed stamp depicts a vase decorated in Hungarian and Chinese motifs. Part of both the Hungarian Parliament and the Imperial Palace appear in the background.