Magyar Posta is issuing a commemorative stamp in honour of the 150th anniversary of the creation of the periodic table of elements by Dmitri Ivanovich Mendeleev. One hundred thousand copies of the stamp designed by the graphic artist Nóra Horváth were produced by ANY Security Printing Company. The new issue is available from Filaposta, philately specialist services, certain post offices and www.posta.hu. 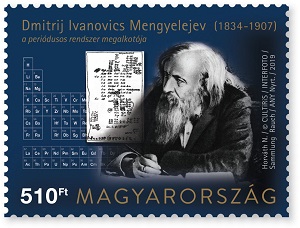 In the course of his investigations, Mendeleev came to the realisation that, by arranging chemical elements by their atomic mass in an ascending order, the periodic trends of their physical and chemical properties will be displayed, allowing the classification of the chemical reactions.

Based on this, he created a periodic table comprised of eight vertical columns containing elements with similar attributes.In addition to the 63 elements known at the time, he also left space for more to be added and indeed predicted the existence and characteristics of the missing new elements.The stamp’s composition shows a portrait of Mendeleev, his handwritten periodic table and a current, simplified periodic table. On the first day cover the graphic designer fitted the inscriptions of the anniversary into a fictitious molecular structure. The main motif of the special postmark is the chemical symbol of the element mendelevium named after Mendeleev. The special feature of the first day cover is that the graphic elements on it fluoresce under UV light.