Mahatma Gandhi was born 150 years ago

Magyar Posta is issuing a commemorative miniature sheet in honour of the 150th anniversary of the birth of Mahatma Gandhi. Forty thousand copies of the miniature sheet designed by the graphic artist Eszter Domé were produced by the printing company Pénzjegynyomda Zrt. The miniature sheet is available from Filaposta, philately specialist services, certain post offices and www.posta.hu. 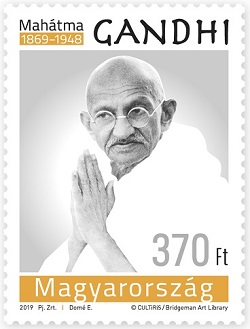 Mohandas Karamchand Gandhi, who was known to his followers by the honorific name Mahatma Gandhi (meaning“great soul”), was a lawyer, politician and spiritual leader of India, who became a key figure in the movement to achieve Indian independence through non-violent protest. He was born in the state of Gujarat in British India in 1869.
He sought to achieve his aims only through peaceful means and advocated abstinence, forgiveness and love. His name is synonymous with the quest for and love of peace. In 2007 the United Nations declared Gandhi’s birthday to be the International Day of Non-Violence.
The miniature sheet contains four identical stamps on which Mahatma Gandhi is giving a namaskar, the greeting of respect made by pressing the palms together. The first day cover and the special postmark likewise depict Gandhi conducting activities typical of him: walking and weaving. The latter is interesting as he himself wove and encouraged the revival of traditional crafts in India including weaving.