As part of the stamp series Famous Hungarians, Magyar Posta is issuing a special stamp to commemorate the work of the physicist and geophysicist Roland Eötvös, who renewed higher education. One hundred and fifty thousand copies of the stamp designed by the graphic artist Barnabás Baticz were produced by ANY Security Printing Company. The new issue is available from Filaposta, philately specialist services, certain post offices and www.posta.hu-n. 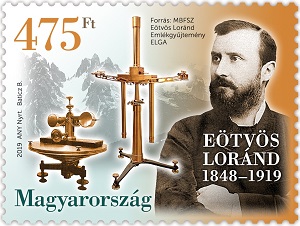 Baron Roland Eötvös de Vásárosnamény (1848-1919) was a Hungarian physicist, politician, academician, university professor, mountaineer, president of the Hungarian Academy of Sciences (1889-1905), Hungary’s minister of religion and education (1894-95), and founding president of the Society of Mathematics and Physics. Three documents related to two outstanding achievements of the life’s work of Roland Eötvös have been inscribed in UNESCO’s Memory of the World Register, and in 2019 Hungary is remembering the centenary of the physicist’s death jointly with the world organisation.The stamp shows a portrait of Roland Eötvös together with the torsion balance and the instrument for demonstrating the Eötvös effect. The background shows the peak named after him. The first day cover shows a snapshot from the place he conducted measurements on Titel Hill (today in Serbia), supplemented by an extract from his speech at the Academy of Sciences in 1901. The special postmark features the eminent scientist’s signature.